Welcome to MavBlog • Providing Insite & Information on the Mavericks Since 1985 • Mankato, Minn. 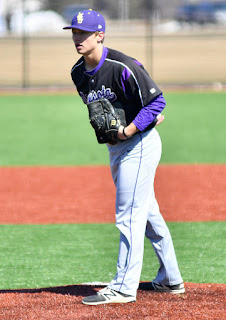 A junior pitcher/outfielder with the Minnesota State baseball team, versatile Cam Klein earned All-America honors last year after posting a 10-2 record while recording a 2.47 earned run average with 112 strikeouts in 80 innings pitched. The Stacy, Minn., native, who also patrols the outfield, hit a team-high .386 with six home runs and 36 runs batted in.

Minnesota State went 39-15 last year and 28-8 in the Northern Sun Intercollegiate Conference regular-season standings.
One of the most successful NCAA Division II programs in the country, the Mavericks made their 37th postseason tournament appearance last year.  Klein took a moment to discuss the upcoming season with MavBlog correspondent Mason Tonsager.

MavBlog: “What kinds of things that the team is looking to improve on for this season?”
CK:  “The pitching staff has all came back from last season along with some freshmen. We also have new transfers that have come here to play and the overall starters from last year are back. The pitching will be solid, but we just have to work in some of the new players into this culture that we have.”

MavBlog: “How has the adjustment been like when working with a new catcher?”
CK:  “It’s difficult at times because Tom (Imholte) and I had a really great connection with each other and were both on the same page on certain situation that we get into. I have to develop that same kind of communication with the new catchers and the freshman have to get games in as well, so they know what it is going to feel like.”

MavBlog: “What are some challenges that you face coming into the season?”
CK:  “I have high expectations and I am surrounded with tons of talent that we have ever since I got her 2 years ago. The team itself has high expectations especially when a lot of returning players are back and healthy.”

MavBlog: “What are you looking at on improving this year?”
CK:  “We plan on winning conference and conference tournament which can help us with regionals. Expectations for the team are to make it further and getting over that hump last season and have a better record.”

MavBlog: “What are some fun memories that you’ve had so far in your career here at Minnesota?"
CK:  “The Florida trip is always fun especially this time of the year where it is really cold here and hot down there. We also have a fun time playing against some good competition. I also had fun last year because we didn’t make it to regionals my freshman year.”